AUSTIN (KXAN) – What looks like a warehouse in Rosewood Park in East Austin is actually a call to anarchy in protest of recent police shots.

Police said 21-year-old Jordan Walton crashed his jeep into a house on Rogge Lane and Manor Road on February 10 and then broke into a neighboring house. Police say Walton fired a gun when officers tried to enter the house. Austin Police said one of their officers shot dead Walton when the department said he was using a child hostage as a human shield.

APD says it was all captured with a body camera but that has yet to be released.

An Austin-based activist group called 400 + 1 claims APD is not telling the full story.

The group says Walton’s mother and father communicated with police in the moments before his death, telling them that he had mental health problems.

Now the group says they want autonomy for the community where Walton was killed.

About a dozen members have planted and named their own congregation, which now revolves around the pavilion in Rosewood Park. They’ve been camping there since February 14, four days after Walton was killed.

Group members say they also hosted protests in the area and provided resources for those in the surrounding community in need of water, food or other items.

Anti-police signs can be seen in Rosewood Park – as well as tents with beds, small tables and chairs inside, a communal refrigerator and microwave, a large communal garden, and a generator that stands next to a portable shower and toilet.

Keith and her co-founder Kristina Brown, who made it their business to lead a revolution, call it a safe place for blacks in the community where they don’t have to fear the police.

Austin school district budget plan has raises, as well as a…

City should close warehouse on Thursday

However, Austin city officials came Wednesday morning and sent notices that the group is violating several city ordinances and has until Thursday afternoon to leave. 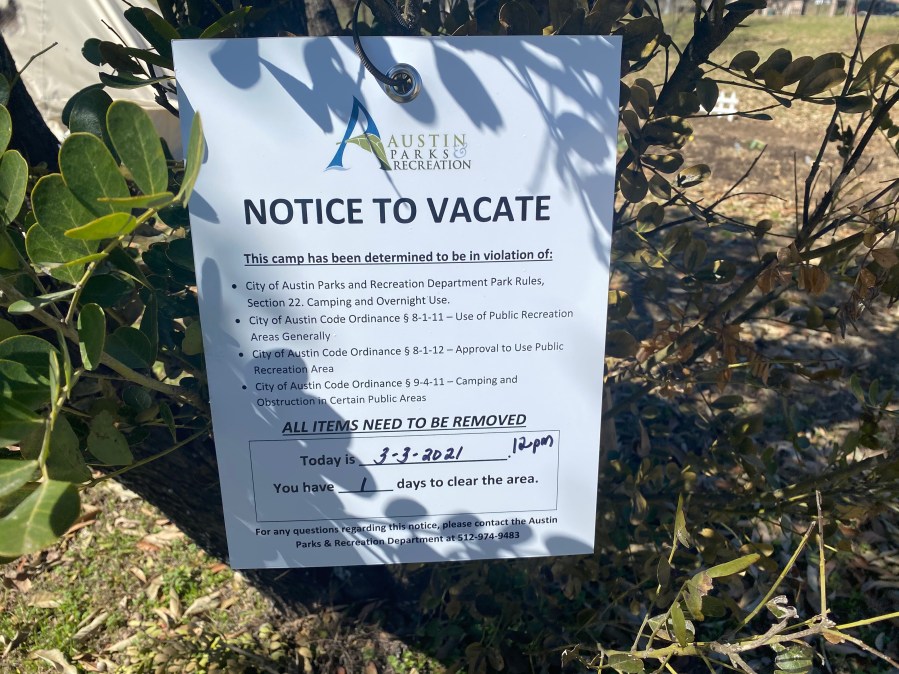 A city spokesman told KXAN the city had asked the group to leave the public park several times.

The city said on Thursday, “We recognize and honor the right to peaceful protest, but this group’s campsite is in violation of city ordinances and preventing the public from using parts of Rosewood Park. The city has worked in consultation with community leaders, council offices, the city’s equity office and several departments to work with the demonstrators to find a mutually acceptable solution. No agreement has yet been reached, but this work continues. “

“We’re not going,” Keith said when Brown agreed. “We announced it from the start.”

The couple say that those who stay in the park are willing to “get their bodies on the line to make that point clear”.

When KXAN reporter Jacqulyn Powell asked in an on-camera interview what could happen if the police show up to enforce the city’s order to evacuate on Thursday, Keith said, “I think it would be unwise for us to to say exactly what that would look like I’m sure the police will see that too. “

“Every American has the right to peacefully assemble, but no one has permission to seize public land, especially parkland that our black elders fought for and secured during a period of explicit community divestment,” she said in one Explanation. “While I understand the frustrations fueling a small group of activists at Rosewood Park, their tactics detract from the progress made through other important collaborations driven by the larger community.”

Keith and Brown say their goal is to take control of an 11 miles long zone in east Austin, including the Rogge Lane area where Walton was killed. They call this zone “Orisha Land” and they say that Rosewood Park, which they renamed “Jordan’s Place”, is the capital.

Your goal, Keith says, is “to keep building power and to keep the police out of this area of ​​our community.”

“We have been organizing in Austin for six years now,” Keith later went on, saying protests and petitions were no longer enough. “We did that. Enough is enough and now the city is being fired. Councilor, you’re fired. APD, you are fired. “

The group also wants white people who have beautified the area to pay reparations to the local black community through donations for the 400 + 1 cause.

Amtrak shares plan that could have Austin to San…