When the City Commission on Historic Landmarks blessed the development plans for the site of the historic Green Pastures restaurant in 2016, it was wholeheartedly the case. As evidenced by the 8-0 vote for the addition of two three-story hotel buildings to the listed five-acre site, this was classified as inconspicuous and viewed as part of the current environment. The plans proposed and designed by Clayton and Little Architects for 2016 also included a 39-foot park structure, two-story laundry / office facility, and one-story greenhouse.

The project was idle until recently and only returned to the commission this year – this time for some reason with plans different from those already approved. Planned stucco exteriors became brick cladding, and the colors of the exterior walls are now dark and muted. Undoubtedly, the new plan will reduce the number of protected trees to be removed from 16 to 6 (there are 210 protected trees in total on the site).

The new plans did not go down well with some commissioners on Wednesday, according to a story by Austin Monitor. Commissioners Terri Myers and Beth Valenzuela, who both voted against the motion, took an exception from the new design. Myers said the hotel looks like a “modern office building” with “very cold, hard, clean geometric lines” and is inappropriate for the location. Some last-minute changes are “false historical elements”.

Venezuela claimed that adding a building in the area would disrupt the pastoral setting of the famous former farm and its elegant Victorian house, built of pine, cypress, maple and oak in 1835. 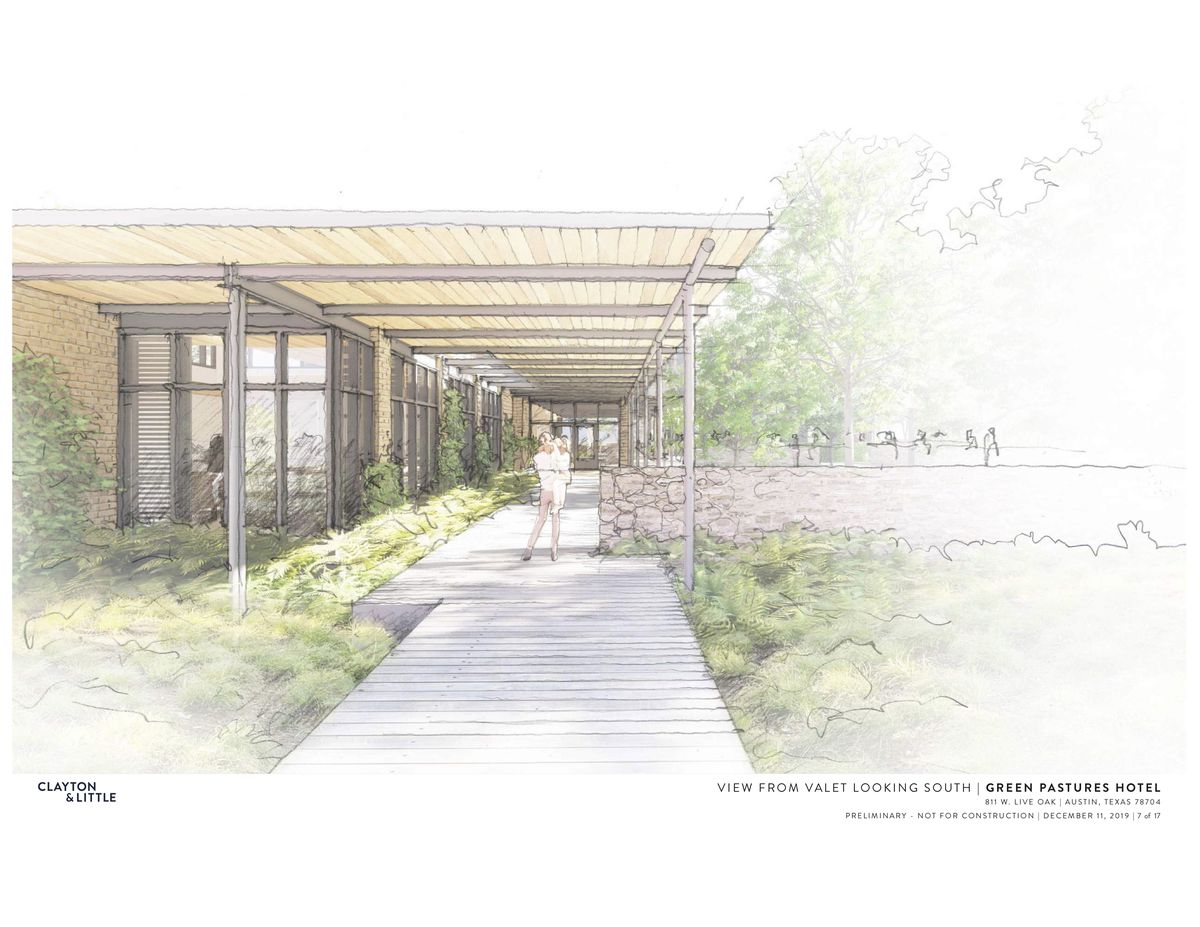 According to the Monitor, some members of the Commission’s Certificate of Appropriateness subcommittee also expressed concern about what they see as the “commercial appearance” of the proposed hotel and called for a better transition between the new and old structure.

Commissioner Ben Heimsath, on the other hand, said he saw the newly proposed hotel as “a very ornate modern building that is in dialogue with the historical” and that both represent their respective periods well.

Project architect Emily Little told the commission that the revamped design would reference the original house while receding into the surrounding landscape so that it remains “the famous queen of the green pastures.” 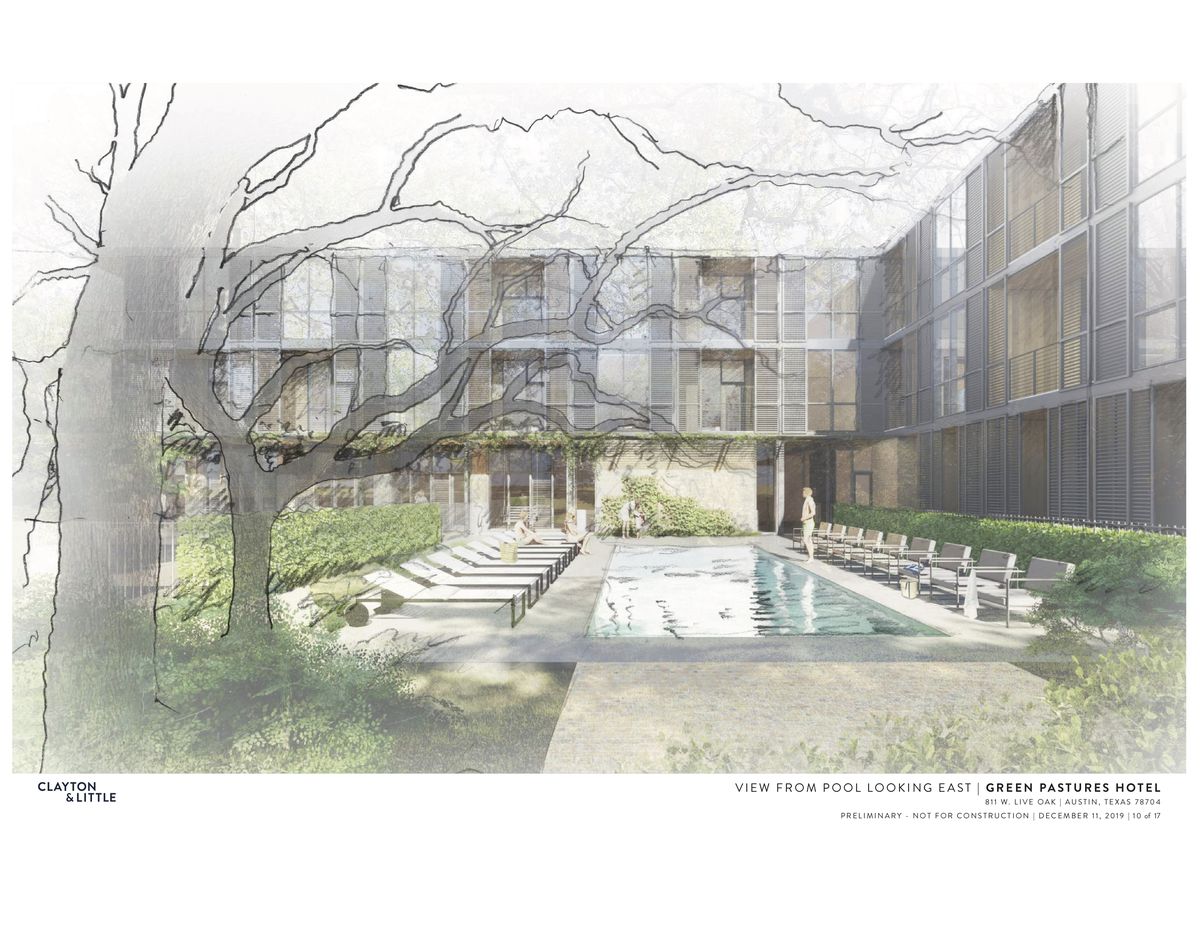 Clayton & Little via the City of Austin Historic Landmark Commission / 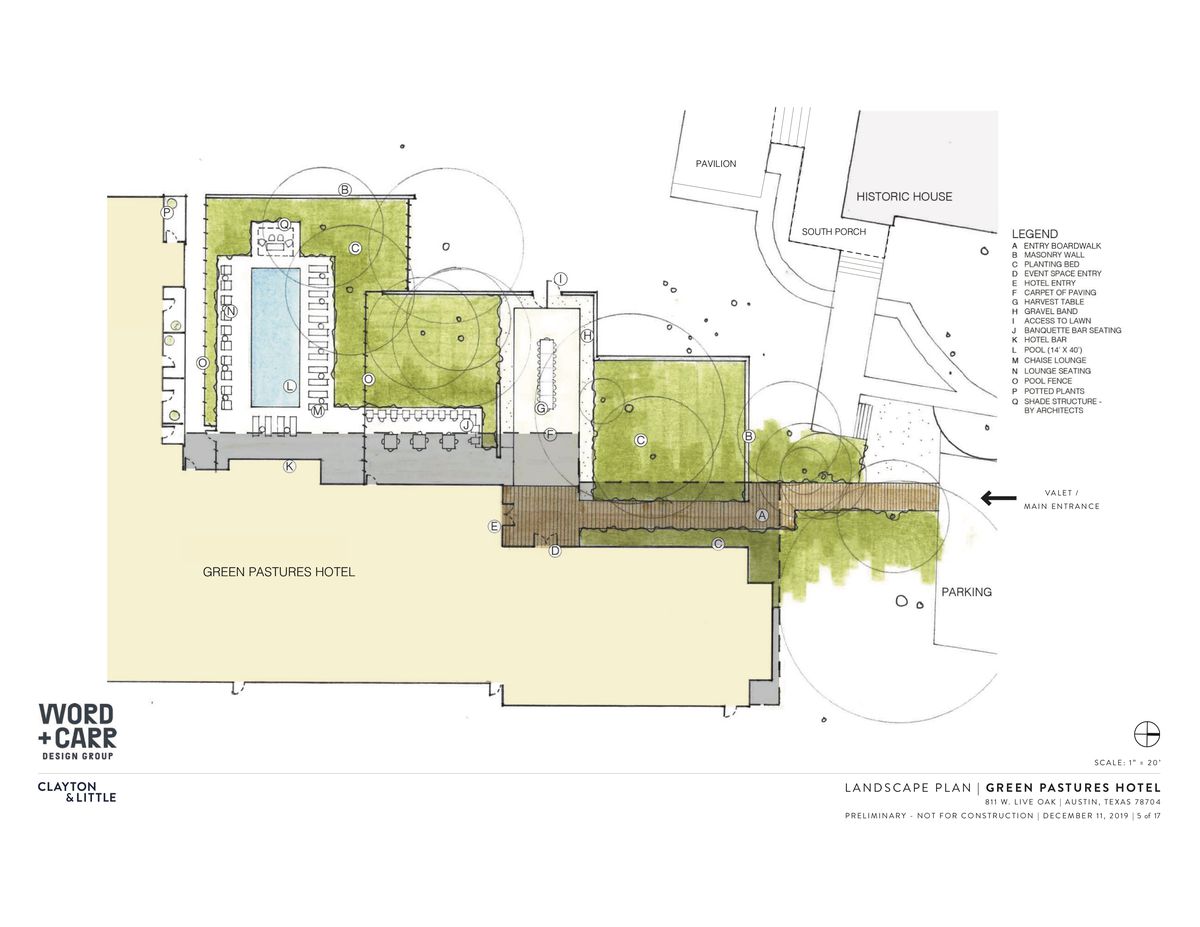 The commission briefly debated removing the status of the Historic Zones from the part of the land on which the new hotel is to be built, but decided that doing so would undermine the integrity of the remaining historic site.

In the end, it voted 6: 2 for a certificate of suitability for the design. with Myers and Valenzuela voted against. The proposed structures have yet to work their way through the rest of the urban development and approval process.

The house and grounds at Green Pastures were home to families with deep roots in Austin. Most notable were the Faulks – Raconteur, 50s blacklisted fighter and namesake of the city library, John Henry Faulk, who grew up there – and the Koocks, to whom Faulk’s sister Mary was married. Mary converted the house into a restaurant in 1946.

The restaurant, now Mattie’s, was a forerunner of Austin gourmet cuisine (as was civil rights – it was a place open to everyone in the deeply separated south from the start) and soon became an institution and focal point for weddings and other events. It has been designated a landmark by the State Historical Commission and entered on the National Register of Historic Places.

City of Austin announces guidelines to bring back events safely

These are the 9 rising stars of Austin’s…

4 injured in shooting on Cameron Road in Northeast…