The council-approved site plan, dubbed Option 1A, groups the new DAC facility closer to the other buildings that share Butler Shores Park, including the ZACH Scott Theater and the Parks and Recreation Department’s main office, with underground parking below the floor space of the new DAC. (Images courtesy of City of Austin)

The Dougherty Arts Center’s new pad is one step closer to its long-awaited return home at Butler Shores Park after the city council unanimously approved the DAC’s site map. The new DAC, funded with $ 25 million from a 2018 city bond proposal, is moving out of its beleaguered facility on Barton Springs Road, now more than a decade after a 2010 condition assessment of the converted Naval Reserve Station was first classified as “irreparable”. In 2019, the council approved the relocation of the DAC to nearby urban parkland, a high profile site on Lady Bird Lake that is also under various design restrictions, with underground easements, lease boundaries, and historic oak trees.

The council’s election last week, however, was not the scenario favored by the city staff working on redeveloping the DAC. Approved Option 1A is one of four potential site plans put together by the project’s design team, Studio8 Architects and Overland Partners. She sees Austin’s oldest community art venue in a new facility west of the Zach Theater in the southeast corner of Butler Shores in front of new three-story underground parking below. The Parks and Recreation Department’s preferred choice, Option 1B, suggested an entirely different location: off the Ann and Roy Butler Hike-and-Bike Trail that borders Butler Shores to the north. That would place the DAC in the northwest corner of Butler Shores as the visual endpoint for West Riverside Drive, and a two-story underground car park would be built under parkland closer to Zach. 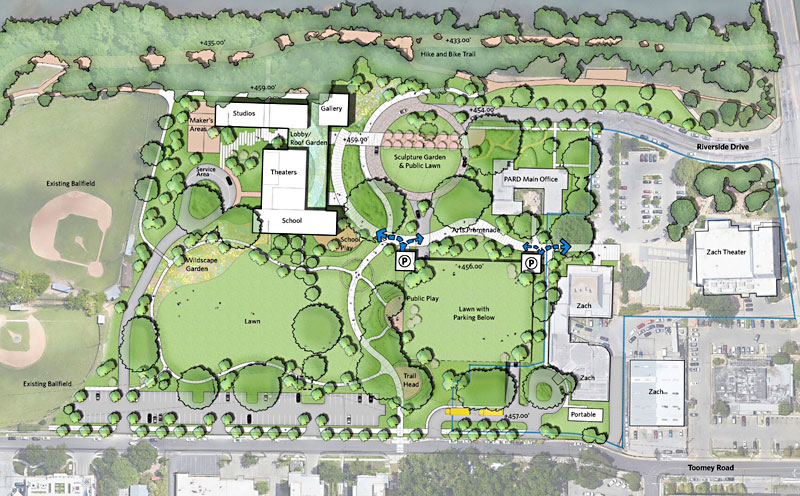 In option 1B, which is preferred by PARD employees, the DAC is adjacent to the Ann and Roy Butler Hike-and-Bike Trail and the ZACH’s Catty Corner. This plan called for a two-story underground car park to be built under parkland closer to Toomey Rd.

Austin.com The Best Pink Places in Austin To Celebrate Mean…

Councilor Ann Kitchen, whose district includes 5 Butler Shores, advocated Option 1A at the council meeting on Thursday, May 20. The plan minimizes the DAC’s footprint by grouping the buildings that share the Butler Shores space, such as PARD’s headquarters, a modern mid-century building, for inclusion on the National Register of Historic Places. Option 1A also preserves more green space and avoids additional impenetrable covers on parking lots, Kitchen said. To the west of the building – where there are now two Austin ISD softball courts – is open parkland that extends from the path south to a small parking lot on Toomey Road.

“We need to get every square foot of downtown green space that we can.” – Save our Executive Director of the Springs Alliance, Bill Bunch

The Save Our Springs Alliance supported Option 1A with the Zilker Neighborhood Association and Barton Place Condominium Owners’ Association across Toomey. SOS attorney Bobby Levinski and Executive Director Bill Bunch urged the CMs to forego 1B on the grounds that 1A had done a “better job” by adding more parkland and green spaces along Lady Bird Lake.

“We need to get every square foot of downtown green space that we can,” said Bunch. Austin is ranked 37th in the Trust for Public Land 2020 ParkScore index, rating the accessibility and quality of parks in the 100 largest US cities. (The ParkScore 2021 Index results will be released today, May 27.) * “Then, as our downtown population skyrockets, we must certainly figure out how to add green space instead of paving it.”

In February, the council-appointed Park and Recreation Board endorsed PARD’s preferred 1B, but changed its mind a month later. Members stated that the Uri winter storm, among other things, affected their ability to make an informed decision. Since 1A was recommended instead, the board cited concerns about the potential impact of 1B on parkland, as did the city’s environmental commission.

Despite PARD’s early preference for Option 1B, PARD executive director Kimberly McNeeley told the council that the division was “very accessible” to Option 1A following Kitchen’s application for approval. Their application also instructs city officials to include in the site’s Traffic Impact Assessment (TIA) the goal of reducing car traffic on Toomey. Curtis Beatty of the Austin Transportation Department told the council that the TIA will analyze the impact of DAC events on local traffic as well as simultaneous events at the DAC and the Zach Theater. According to PARD project manager Kevin Johnson, the department has reached an agreement to reserve some parking spaces for PARD and DAC employees on the nearby Schlotzsky new building on Lamar. Construction of the new DAC is expected to begin at the end of 2022.

* Editor’s note: Austin ranks 45th on the Trust for Public Land’s 2021 ParkScore Index; You can find the complete ranking here.

Austin.com The Best Pink Places in Austin To Celebrate…

Austin mayor declines to ‘return the…