Austin restaurants and bars have been looking for solutions to their COVID-sized problem. What’s affordable and exciting enough to attract customers but responsible enough to put those customers’ health first? The answer to that question is burgers, as three burger pop-ups recently sprang up in town: Fat City, Bad Larry Burger Club, and Golden Castle. Everyone walks on a model that walks this tightrope and it goes well.

When it comes to pandemic cuisine, burgers have risen to cater for the occasion. They are consistent and deceptively simple and travel well. They also offer an air of normalcy – something on the menu of restaurants and pubs – at a time when the world is anything but. In the pop-up restaurant area, burgers also offer the much-needed flexibility. If a bar has a kitchen, they can be made with ease; If not, an outside grill will do the job if necessary. You can also plan ahead with burgers and know exactly how many patties to sell before you close for the day. When you are outside, you are outside.

Slider popup Fat City was founded in direct response to the pandemic. Eric Silverstein, the founder of the South Asian Tortilla Peached Tortilla, came up with the burger pop-up to support his struggling catering and event staff this spring. “While restaurants have definitely been hit by the pandemic,” he says, “the live events and catering industries have only just been crushed.”

Originally his idea was to create a ghost kitchen and turn Peached’s empty catering kitchen in North Lamar into a new on-the-go venue. However, when Silverstein was informed by his PR firm of an opportunity in the neighboring dog park and in the Yard Bar, he took the opportunity to bring his menu to life with “Fat Stacks” as a pop-up.

The Bad Larry Burger Club was born out of inspiration and necessity in equal measure. Founder Matthew Bolick (co-owner of downtown Little Brother Bar and 2018 Eater Austin Restaurant, Better Half) says he has struggled to adjust to life during a pandemic. “I got bored pretty early on during COVID,” says Bolick, “and Little Brother failed miserably.” Although he started his Backyard Burger Club in 2019, now was the perfect time to really expand for the public. To give advice to his staff, he decided to “toss some burgers off my porch, take the dollars, and give them to the crew because they are the best”.

Stephen Kaste, the owner and operator of the East Sixth Food Truck Golden Tiger, took a different approach. The idea for White Castle-inspired burgers was already in the works, originally as a food truck. When the pandemic broke out, he took this opportunity to change his plans. “It just didn’t seem like the time to open a brand new trailer in the middle of COVID,” he says. Rather than investing tens of thousands of dollars in a new business, he decided to open Golden Castle as a “passion project” that would coexist with his current business.

The popup model matched Kaste. “I can offer products of the highest quality in a time window that makes sense for me,” he says. With each new popup he can plan and prepare a certain amount of meals for each operating window. He has a set amount of food to sell, and when that limit is reached the pop-up window is ready. He notes that at this point it could sell out within two hours. 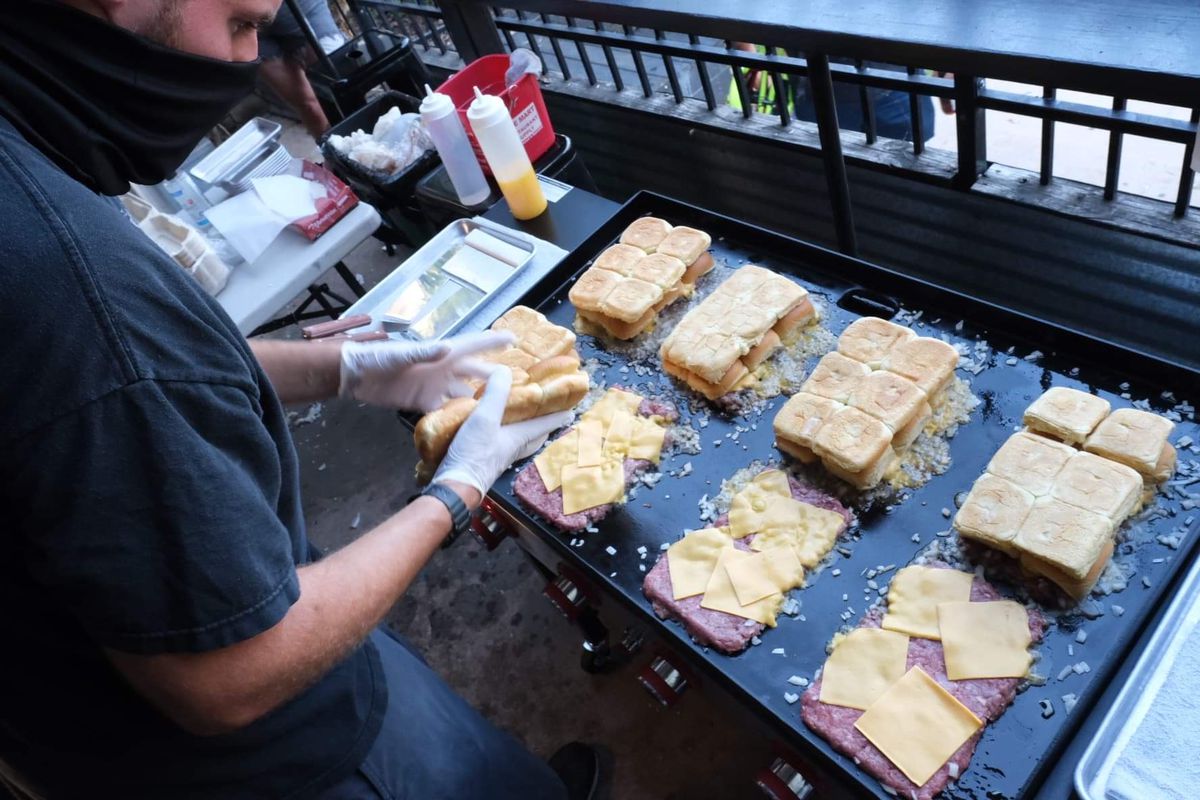 Bolick takes it a step further by relying on social media buzz and presale to give its pop-up an event feel. “If you don’t follow Instagram, you won’t necessarily get a burger,” notes Bolick. For example, a run on his food truck Bummer Burrito was recently teased on Bad Larry’s Instagram account, with a limited time slot for pre-orders this weekend and absolutely no promises that every customer would be satisfied. “There will be burgers. There will be no burritos. Some of you will eat. Others will [be] crazy, “was the post. “Be quick, not least.”

While these pop-ups are necessary products, their appeal to any owner – and to the community – goes beyond the convenience of fast food. The optimized menus allow adaptation to different indoor kitchens and outdoor grills.

There’s no denying that the simplicity of the burgers makes it easier to keep customers safe. Bolick appreciates the compliments he got for the meal, but sees the existence of Bad Larry himself as more important. “Cheeseburgers are just another vessel for me to use when reaching the community or reaching out to people who are just having a good time and wanting to offer something unique for them in a week when shit is gnarled,” he says. In a world without live music, he adds, Bad Larry is supposed to be “a punk rock way of making a cheeseburger”.

The increasing popularity of sliders also speaks for the steadily increasing number of transplants in Austin. “We found that there are a lot of people from the Midwest and Northeast who miss these mini burgers,” says Kaste, referring to his slider style. “People come out in bulk to buy.” Silverstein shares this opinion, noting that this particular type of burger – burgers seared to lock in the juices – speaks for the growing number of unique burger pubs in Austin. “There’s not a lot of competition in the burger market,” adds Silverstein. “The kind of burgers we made, the White Castle-inspired mini-sliders that we thought were unique and maybe nostalgic.”

The pop-ups are also causing a stir at a time when many Austinites are desperately seeking socially distant excuses to leave their homes. “Everyone has made pop-ups of some shape or fashion over the years,” says Bolick, “but during COVID it became very clear that people were excited.” People really needed it, they needed something new to look forward to in their week. “

These pop-up events are a big draw for bars without a kitchen or food trucks on site. When Kaste ran his pop-up in the retro bar Low Down Lounge on East Sixth, he let the bar take food orders and encouraged people to order drinks in addition to food. At the end of the day, Kaste shares his tips with the venue. “We give half of it to the bar to help them,” he says, “because it’s not easy for anyone at the moment.” Meanwhile, Silverstein said Fat City’s success had a significant impact on Yard Bar alcohol sales. “It brought an influx of people and it fueled their alcohol sales,” notes Silverstein, adding that Fat City’s presence “tripled” the alcohol sold during their two-day engagement in August. “It was a nice shot in the arm for revenue.” 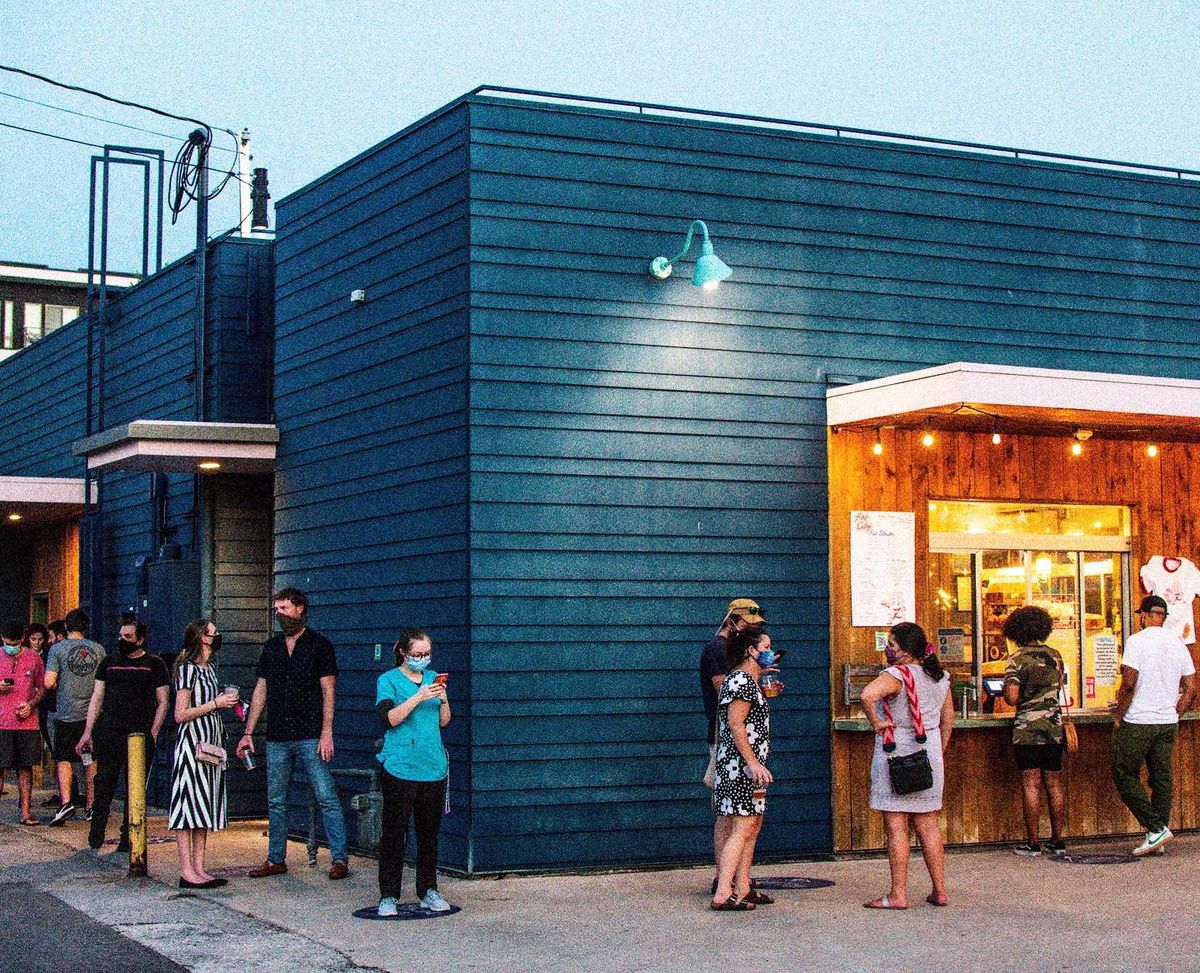 And while the future of all three venues – like so much in the Austin’s food scene – is somewhat uncertain, each owner hopes their pandemic project will survive through 2020 and beyond. Kaste uses his pop-up model to support the team at the Original Hoffbrau Steakhouse. It operates a temporary burger shop called Pickup called Hoffbrau & Co., while the former is dormant for the time being. Meanwhile, Silverstein continues to research delivery-only models and other outdoor projects like Fat City, realizing that “beyond the pandemic, there is some life behind it.”

And Bolick has plans for A Very Bad Larry Christmas at Little Brother, with diners never knowing if burgers are on the menu. “They’ll be available sometimes,” he notes, “and it gets really annoying because no one is going to know when they’re available, and it’s going to be really fun.” He could also brew something in LoLo, Austin’s first own all-natural wine bar.

Whatever the future holds, these three pop-ups will continue to add a little variety to Austin’s food scene in the near future while helping local businesses. In a year like this, these are the kind of wins they don’t take for granted.